The Grizzly Corner of my Bookshelf 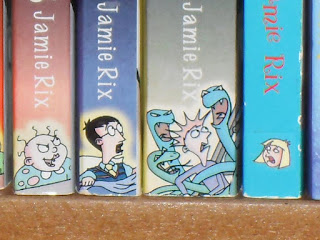 There's a corner of my bookshelf for the books that have formed fragments of my professional life. Some I've illustrated, some are based on TV programmes I've been involved with, and others are the source material for animated shows I've produced.

Grizzly Tales for Gruesome Kids by Jamie Rix has been part of my life for almost two decades. Not only did my wife and I design the cover illustrations for the TV tie-in editions of the first four books, we also co-directed eight series of these award winning cautionary tales for ITV and Nickelodeon.


When our company, Honeycomb Animation, was moving from London to a converted barn in Devon, we took on a consultant to help us with our new project, Wolves Witches & Giants . One of the first meetings Jill had was at the new ITV company, Carlton, which had just replaced Thames.

“I’ve just met the man I want to marry,” she had said after her meeting with Michael Forte.

On meeting Michael ourselves, Jill’s pin up turned out to be a bit of a comic, mimicking rival children’s commissioners and recounting amusing stories about his days in Saturday morning telly.

He didn’t go for our show, though he was later to inherit it once Carlton had taken over Central, who had subsequently backed us. As we were leaving he said, “look, I like what you guys do. Have a look at this book. Get in touch with the author, and see if you can come up with something.” The book was Grizzly Tales for Gruesome Kids.

After four series of Wolves Witches & Giants, we entered into a development deal with Carlton to find its successor, and seven years after our first encounter of Jamie Rix’s creations, the first series of Grizzly Tales aired on ITV. Now, a subsequent twelve years has passed, and we've completed the eighth, new improved series, this time for Nickelodeon UK, but for me, the Grizzly journey started in Michael Forte’s office in 1993, and the reading of the hardback edition of the first Grizzly collection, which still sits on my bookshelf.

Further Grizzly Tales information can be found at www.grizzlytv.co.uk
Posted by Simon Bor at 13:41