Books are value for money 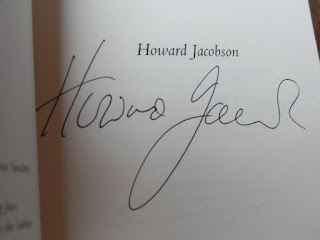 I have just returned from The London Book Fair clutching my signed copy of Howard Jacobson’s book ‘What Ever it is, I Don’t Like it’. At £18.99 I had to think twice before handing my money over to the tiny Foyles bookshop at the rear of Earls Court’s ocean of publisher’s trade stands. £18.99 is a typical full price for a hard back, but these days you would expect to buy three books for the price of two or a discount of a few of Howard Jacobson’s smackers.

I could have bought it at Amazon for £12.34 free delivery, but the chance to have a few words with the self styled ‘Jewish Jane Austin’ got the better of me. He was just about to leave; a few copies still remained on display. My credit card was produced and I bought one. Folyes would not even honour the 5% discount to London Book Fair delegates available at their main stores. In one minute thirty seconds, Mr. Jacobson not only provided me with his inscription, but also gave me permission to be Jewish, even though I am only on my paternal side. As a Welsh born, Irish, English, Maltese, Latvian, Jewish Gentile, I’ll probably stick to calling myself European.

The last time I attended the fair was in 1990, when I also returned with a signed book. That time it was  John Mortimer's latest novel. I paid £13.99, the ‘going rate’ for a new hardback at the time.

We can ignore the half price offers at Tescos, and need not wait a year for a 75% discount at The Works. A full price book is value for money.

http://www.thisismoney.co.uk/money/bills/article-1633409/Historic-inflation-calculator-value-money-changed-1900.html
Posted by Simon Bor at 02:38