Further along the bookshelf: Thunderbirds & Dr. Who 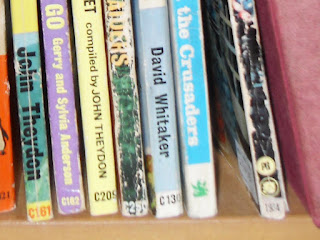 I've always collected series of books. As a child, I bought the books by John Theydon, based on Gerry Anderson's TV series Stingray, Thunderbirds and Captain Scarlet. The first Doctor Who book was published by the same company and sat on my bookshelf next to the Gerry Anderson titles.  I  had discovered Doctor Who a year or so before the book was published, on the morning my seven year old self had heard about the death, the previous day, of JFK. I was listening to Uncle Mac’s Children’s Favourites when the news bulletin announced his death, my younger brother had asked me who Kennedy was.

“Oh,” I had said, “It must be the president’s brother,” thinking that it was impossible for the President of America to have died, and brothers were fair game. How could I have realised that the equally violent death of Kennedy’s brother Robert, was yet to come.

That was the morning of 23rd of November 1963. The day several million people in Britain first met Doctor Who.

I was very aware of this new series, mainly because of the picture in the Radio Times of what looked like an old man with a spinning wheel. The image had reminded me of a cross between The Old Curiosity Shop, which had been on TV fairly recently, and a wicked witch, waiting for a Princess to prick her finger and fall asleep.

I now know this well used photograph is of the Doctor in his junkyard, with a bicycle wheel in the foreground.

Later that day, I remember talking to my friend Graham; apparently he had watched Doctor Who before; or Mr Who as he kept calling it. He told me how brilliant it was. I was as excited as he was about the way he was selling me this new series, though it sounded more slapstick than the picture in the Radio Times suggested. Graham had seen it at the cinema and told me it was funny, because Mr Who couldn’t see without his glasses.

I would have seen the first episode that evening if it were not for one tiny problem.

The telly had gone.

My father had hired a television on two occasions, which had coincided with his long summer holidays from the University in Aberystwyth, and the cricket season. He would spend the summer listening to John Arlot on the radio, simultaneously watching the television broadcast with the sound off. I had summers of Watch with Mother, Noggin The Nog, and the Sunday classic serial. But as the evenings drew in and the rest of the country started watching more television, my father went back to work and the telly returned to the shop. I would have to wait several weeks before I would join the Doctor, mid way through his first visit to Skaro.

I did ask Graham if the first episode of Doctor Who was as good as he had hoped it was going to be.. “It was rubbish! It wasn’t the thing I saw in the cinema at all. I got it mixed up with another programme”,

Please feel free to leave comments about your earliest memories of Doctor Who.

My earliest DW memory would be the Day of the Daleks compilation repeat in 1973. I would have been 4 and interpreted it with a 4 year old's mindset. The Ogrons were 'giants' to me, and the Doctor some amazing wizard. Interestingly, I have no memory of the Daleks from this viewing which only goes to show just how anti-climactic that final battle really was.

I became a regular viewer with The Time Warrior just a few weeks later (the episode 1 cliffhanger with Linx poking his tongue out melted my brain) and by the time Death to the Daleks came around, I was hooked for life.

mine would have to be the candyman.
"he makes sweets that kill people"
i loved sweets and he scared me to death.
either that or the dalek flying up the stairs out of a bassment
yikes