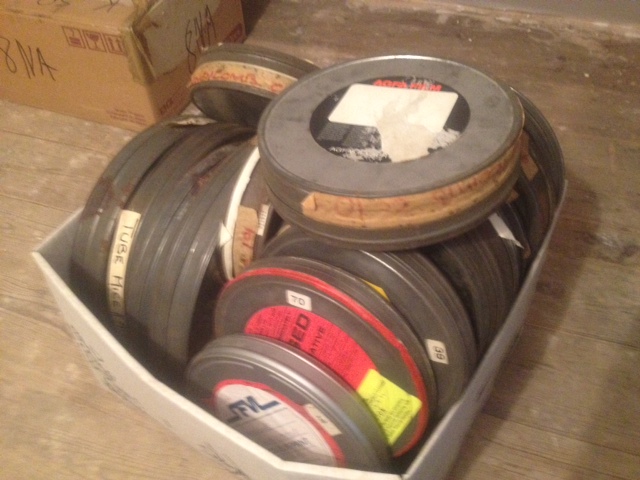 Boxes of 16mm film were returned to us for safe keeping. These are the original prints for our series Tube Mice.

Archiving television programmes does not have to take up much space in the 21st century. All data and edited programmes for our latest series of Grizzly Tales are stored on a couple of terabyte drives.

It has not always been as simple as this.

The BBC used expensive 2 inch video tape back in the black and white days of the nineteen sixties. They would routinely reuse the tapes once a programme had been transmitted.

Programmes deemed to have financial value and could be sold by BBC Enterprises were copied onto 16mm film: programmes like Dad's Army, Hancock's Half Hour and Not Only But Also.

In January 1970, BBC1 began transmitting in colour, and soon black and white TV was beginning to be phased out all over the world. By the mid seventies, believing that older monochrome programmes had little value left in them, BBC Enterprises started to destroy their archive of prints.

Wind back time two or three years to 1973. I was an Art Foundation student and we had a visit from the BBC to talk about careers in the organisation. The speaker was the deputy controller of BBC 1 who told us that his job was to watch television. He would watch the out-put of ITV every evening (this was long before the advent of day time TV) and then watch BBC1's out put during the day on a magical machine called a video recorder. He told us that very soon, we would all be able to record programmes at home or even hire or buy our favourite ones. The notion seemed incredible to us.

Showing us a Radio Times special of Doctor Who, he believed that there was mileage in selling programmes like that in order to finance new ones. It was unfortunate that BBC Enterprises did not have the same vision as most episodes of Doctor Who still existed at the time of his talk.

We produced Wolves Witches & Giants on 35mm film but edited on video. Once completed, broadcaster Carlton Television kept the PAL master tapes. We could not afford to maintain expensive storage for the artwork and film prints, and Carlton made the decision to destroy them. The series still airs on CITV, but, had we and Carlton agreed someway of saving the 35mm film, it could have had a new HD lease of life.

As for the BBC, rumours suggest that many black and white prints have been found in TV stations across Africa. Maybe some of those black and white episodes of Doctor Who and Pete and Dud have survived after all.

Email ThisBlogThis!Share to TwitterShare to FacebookShare to Pinterest
Labels: Dad's Army, Hancock's Half Hour, Missing Episodes, Not Only but Also., Tube Mice; Doctor Who