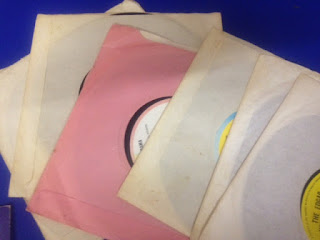 Plain-paper-wrapped vinyl 45 rpm singles were part of my youth.

It started with "She Loves You" by the Beatles, bought for me by my father after Beatlemania  reached my primary school in Wales.

The first record I bought for my self was "The Last Train to Clarkesville" by the Monkees.

As the drug scene of the sixties got its hold on pop music, my parents dissuaded me from buying records, but by the early seventies collections of singles by Slade, T-Rex, Wizzard and Roxy Music started to grow in my bedroom, augmented by LPs from former Beatles, Focus, Eno, Pink Floyd, David Bowie and Doctor Feelgood.

By the mid seventies, the plain wrappers started to be replaced by printed designs. At first just for special releases, but soon this was to be the norm.

Then there was punk from The Sex Pistols, The Damned, The Clash and The Stranglers. The DIY era of the 45 had arrived. Soon my family was involved in the industry. My brother's band "The Users" releasing a couple of singles, then my sister's group "Dolly Mixture" releasing a string of singles before hitting No1 as backing vocals to Captain Sensible's "Happy Talk".

The last single I bought was "Two Tribes" by Frankie Goes to Hollywood, but I continued to buy LPs throughout the eighties until the fateful day when the new CD player was installed. The age of crackles, skipped groves and fluffy needles was over.