Anyone living in Cambridge in the 70's will remember Waffles. It was pulled down, along with most of the area known as 'the Kite' to make way for the dreary Grafton Centre. 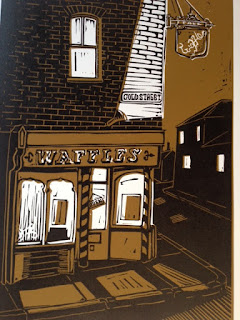 One of two prints by Simon Bor on show at The Southwest Academy Open Exhibition   29th September to 3rd October 2015 at St Stephen's Church, High Street, Exeter
Posted by Simon Bor at 05:29

I remember it being being printed ....great weekend of fast and heavy press work and inking. Hope show goes well, regards
Katie Green