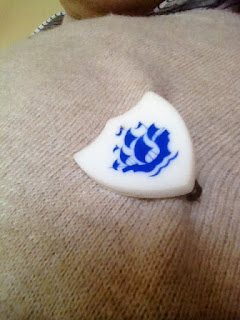 The Mail Online has an interview with Blue Peter legend Biddy Baxter, who happened to be the person who invited me to a BBC studio for the first time. How my aunt knew Biddy Baxter, I never discovered, but it was all arranged during a visit to London. My aunt packed my brother and me into a black cab and we were soon sitting in  the Blue Peter studio. I was ten years old and the original team of Chris Trace, Valerie Singleton and John Noakes were carrying out a final run-through of the day's edition of Blue Peter.

The strongest memory I had was the late Chris Trace having fag breaks behind the cameras, every-time he wasn't needed on screen.

Then we were ushered through to a small viewing room to watch the monochrome broadcast of the live show.

To thank Biddy Baxter for her kindness, I drew pictures of Petra and the other Blue Peter animals. A week or so later, an envelope landed on the front mat of our Aberystwyth house. It contained a Blue Peter badge in return for the pictures.

A few scandals have rocked the show since then; The Chris Trace Affair, The Richard Bacon Sacking and Kitty Gate to name but three. However, the badge has remained a treasured item which is far more fondly remembered than that other BBC gong, the now hated  Jim'll Fix it Badge.

After reading this blog, my brother reminded me that to get to the Blue Peter studio, we had to walk past the Top of The Pops studio, and there was the infamous Jimmy Savile, dressed in white, standing on a podium, cigar in mouth with arms waving about.
Posted by Simon Bor at 05:17

In 1964 when i was 5 and a quarter I sent a paper puppet to Blue Peter. six months later I received a letter addressed to Emma Calder aged 5 and three quarters. "Dear Emma, Thank you for you letter. We are very pleased with your cut out drawing and we are sending you a "Blue Peter" Badge. With best wishes from Chris, Valeria and all us on the programme. yours sincerely Biddy Baxter" The letter and badge are among my most treasured possessions.