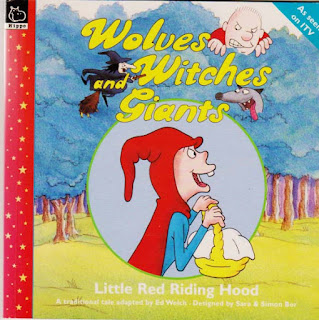 Wolves Witches and Giants was written by Ed Welch and narrated by Spike Milligan. It ran on ITV between 1995 and 1999 and went on to be shown in around 100 territories and won the Best Children's Entertainment award at the Royal Television Society. Today, the programme is still shown on the CiTV channel in the UK. Since making that series, Sara Bor and I have co-produced and directed eight series of Grizzly Tales for Gruesome Kids based on the books by Jamie Rix.

So how would I tackle the story of Little Red Riding Hood in 2013?

This is how: here's an extract from my short story,  Bad Mr Wolfe.

‘Is there something wrong Mrs Hood?’ I had unloaded the ivy-clad logs into to the lean-to shed and was returning to the pick-up to fish out the invoice.
‘It’s Ginger. She took some cake over to Mom’s house this afternoon. She should have been back by now.’
‘Have you phoned your Mother?’
‘That’s what’s so weird, she’s not picking up. Would you mind dropping in Cubby? It’ll be dark soon, Ginger ought to stay the night with Mom.’

A crow would have taken five minutes to get to her mother’s house, but the metalled track snaked through the woods that encircled the razor-wired grounds of the Loup Hall Asylum.
It was dark by the time my tyres crunched the gravel outside old Mrs Hood’s cottage. There was something wrong. By now her fire should have been lit and the light in her kitchen should have illuminated the cottage garden.
A blood-curdling scream filled the night air.
I rushed to the front door, smashing the lock with the butt of my chainsaw. As I ran down the hall, there were sounds of a struggle coming from the kitchen. I forced opened the door. There in front of me was the shape of Mrs Hood, grappling with the door of the old larder.

You can read rest of the short story HERE or visit http://simonbor.co.uk and go to the Fiction page.
Posted by Simon Bor at 07:06