Bag for life or biodegradable. 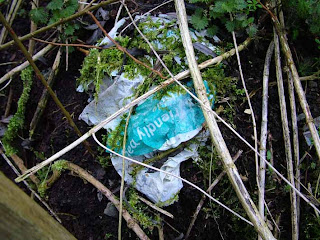 Some supermarkets offer bags for life we can use time and time again, while others use biodegradable bags we can throw away.

Somerfield's bio-degradable bags enabled me to throw them away with no feeling of guilt. I even used to collect kitchen compost in them and, as they were bio-degradable, chuck them on the compost heap.

The most bizarre place to find a Somerfield plastic bag was in China. A department store was using them as  their own: when I visited the country in 2001. The exotic blue and white bags were a fashionable item in the city of Nanchang. How such a vast supply of a UK supermarket's bags had got there is a mystery.

Somerfield stores have now disappeared, but their bags live on: real bags for life.

I planted a hedge ten years ago. When cutting it back today I discovered several plastic bags. Environmental friendly bags, according to their fresh blue print. Not even the ink had bio-degraded after months in a compost heap followed by ten years under a hedge.

Don't believe everything you read: especially on a plastic bag.
Posted by Simon Bor at 09:23 1 comment:

How to make Tea 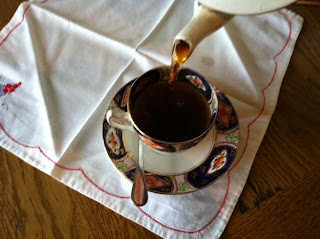 I think of the author, Arthur Hailey, when I brew tea. He wrote about the importance of using boiling water to make the beverage. It’s the only thing I can remember about his novel, Airport, but it’s sound advice I’ve followed since reading the book at thirteen.
Another tea-obsessed author is the late Douglas Adams. He may have been able to predict the i-pad, when he created The Hitchhiker’s Guide to the Galaxy over thirty years before the launch of Apple’s miraculous tablet, but I have to take issue with his advice on brewing the perfect cuppa.

It all starts so well as he explains that Americans don't appreciate the beverage because they don't know how to make it properly:  (Arthur Hailey devotees are presumed to be exceptions.) He is right when he states, ‘the water should be biolING (not boilED) when it hits the tea leaves(Adams 2002:67).’ Then comes the inevitable disappointment as the author instructs us to use Earl Grey tea and to put the milk in the cup first.

Milk with Earl Grey tea is bad enough but to put the milk in first is unforgivable. If you have to drink Earl Grey, then don't add anything to it at all. No sugar, no milk not even lemon. It has enough flavour of its own.

To make the perfect cup of first buy a packet of builder-grade PG Tips, Yorkshire Tea or Liptons Everyday.  Never use the kind of tea you find in European and American cafes such as Liptons Yellow label.

Pour boiling water over the tea bags until the pot is almost full.

Wait four minutes and then stir the pot.

Pour into a mug if you are on your own, or two bone china teacups if you are entertaining.

Add the milk: not too much.

Now is the time to add sugar: if you really must.

Stir, sit back and enjoy with a chocolate biscuit; no dunking allowed.

Most would argue that it really does not matter when the milk and tea are united, but there is a difference in taste. Adams’ case for putting in the milk first is scientific. He believes that the milk will scald if added to hot liquid. Tea certainly has a sharper taste when the milk is put in last and, if that is because the milk is scalded, that’s how I enjoy the infusion. 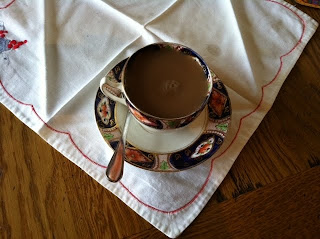 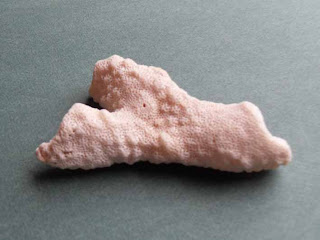 This piece of corral, from paradise, evokes a shared meal of whole grey mullet and rice. A sleep under a star filled sky, on a stretch of coconut-bordered east coast Sri Lanka; waking up to the sounds of the Indian Ocean and the howls of a pack of wild dogs.

Then later, in Jaffna, there was nothing to drink. The hotel only had water for two hours a day; cafes were closed. To the rescue: a local man: smiling with beetle-red teeth. A tree climbed and coconut harvested out of kindness. His machete sliced the large green-nut; cool, sweet liquid quenched our thirsts.

A small piece of corral picked up from paradise: long before the hell of civil war and tsunami.
Posted by Simon Bor at 04:06 No comments: 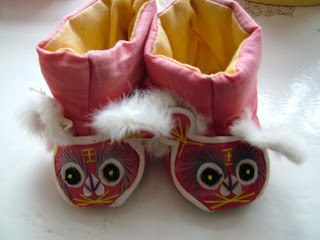 Happy adoption day to my youngest daughter. My two children have an extra celebration each year; yesterday I went shopping to help my eldest daughter buy her sister a present.

The long queue outside Waterstones was for a "ticket only" signing by, one of one of my youngest daughter's favourite authors, JacquelineWilson. A chance to get a signed copy of her new book was too good to miss. The assistant, looking after the assembled Wilson fans, had one ticket left. So we duly bought a copy, of the aptly named “The Worst Thing About My Sister”, and joined the queue. We were 248th, out of the 250 signings, but Jacqueline was still happy and smiling as the last customers filed through to her.

‘Any message’, she asked

‘That's lovely, no one has ever asked me to do that before. Is it for you?’ she said looking at my eldest with a broad smile and sparkle in her eyes.

‘It's for my sister’, said my daughter.

‘And it's her eleventh adoption day tomorrow,’ I continued.

‘What a lovely idea,’ she said.

Happy adoption day. Maybe it's lovely idea for the next Jacqueline Wilson title?
Posted by Simon Bor at 09:29 No comments:

Email ThisBlogThis!Share to TwitterShare to FacebookShare to Pinterest
Labels: adoption, china, Jacqueline Wilson, the worst thing about my sister, Waterstones

Mrs Thatcher: My Coat's Part in Her Downfall 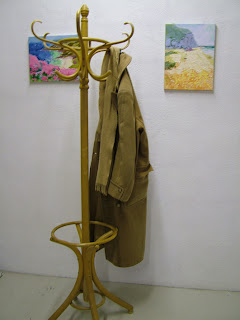 My camel coat has come back into my life every winter since I bought it for a hundred pounds in the January sales of 1990.

The coat may never have seen it’s first anniversary in my care: but for a sharp-eyed colleague after I had left it unattended at a London Film Festival reception hosted by.animation pioneer John Halas.

Cheap wine amplified the buzz of excitement around Mrs Thatcher’s impending demise. On the other side of the murky Thames, thoroughbred stalking-horse, Michael Heseltine was rocking the political landscape with his strong showing in the first round of the conservative leader’s election.

My former tutor, and Oscar winning legend, Bob Godfrey, was on fire. He vowed he would dance through the streets of London, naked, should Thatcher fall at the next round.

By the time I left there was a solitary camel coat hanging by the exit. A group of us crossed the river in search of pasta. I noticed something strange in my coat pocket.  How had an ancient rubber dwarf from Disney’s Snow White got in there? It was sometime later that I realised that the coat I was wearing was not mine. It was older, a little shabby, and a good six inches shorter.

The next morning bleary-eyed colleagues suffered in silenced as I moaned about the loss of my coat. Looking at the imposter coat, hanging on the wooden hat-stand, one of them said, “That’s John Halas’s coat”. He had spent a year working for John Halas and knew the coat well.

I set off for Halas’ office. My coat was on the back of the door. His PA pulled out a rolled up Times from its pocket and transferred it to the real John Halas coat. Seeing the rubber dwarf she simply said, “Bless”. She hadn’t mentioned the mix up to Halas: he probably would have preferred to keep my new coat.

The return of the coat coincided with Mrs Thatcher’s demise. I don’t know if Bob Godfrey danced naked through the streets for real, but my hastily drawn cartoon, of the act, was soon faxed to him.
Posted by Simon Bor at 05:19 1 comment: